Pilot Whales - The Cheetah Of The Deep

The pilot whale has a bulb-like head and a small mouth that slants up toward its eyes, giving it the appearance of always smiling.

The International Whaling Commission says the pilot whale was given its common name because "it was once believed that each observed group was navigated by a pilot or leader."

Their speed & diving depths are the reason they are considered the cheetah of the deep. They have been known to travel at speeds of up to 20 miles per hour in the ocean. They can remain submerged for over 10 minutes without coming up for air, diving as deep as 1,600 feet—due to their fast-swimming speed and long dive time.

Combined with their high intelligence, this explains their unique value to the Navy, (which we will talk about later.) 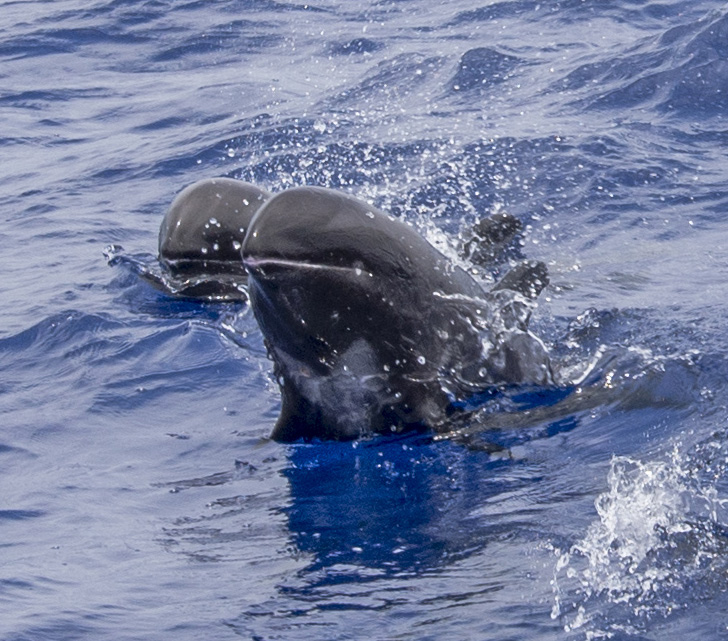 They Are the Second Largest Animal in the Dolphin Family

The only animal in the dolphin family that exceeds the size of a pilot whale is its cousin, the killer whale. Both subspecies are similar in size and range from 13 to 25 feet long.

They also weigh anywhere from 1 to 3 tons, with the males being much larger than the females.  The oldest known pilot whale was over 60 years old when it died.

Calves are born after a 15-month gestation period and weigh around 225 pounds. They nurse on their mother's milk for about 22 months, although there is some evidence that they may continue to be nursed by the herd into their tenth year of life.

They Eat Up to 70 Pounds Each Day

These marine mammals have large heads and short beaks, each lined with 40 or 48 teeth. Their diet consists primarily of squid and octopus but also includes cuttlefish, herring, and other small fish species.

They have fewer teeth than most dolphins, which generally have 120 teeth, which may be why Pilot whales prefer squid, where the teeth are only used for catching.

Pilot whales are nocturnal hunters that catch their prey in groups. They communicate using sounds that resemble high-pitched whistles, which allows them to keep track of each other's whereabouts. They hunt by circling their prey and can eat as much 70 pounds in a single day.

The star of the Navy’s Project Deep Ops

The Navy was looking for more reliable ways to recover lost weapons from its ocean test ranges. Human divers could recover objects at depths less than 300 feet, while unmanned submersibles could reach 2,500-foot depths.

However, the use of humans or submersibles was limited by mild sea and weather conditions. Whales were believed to be able to dive up to 3,000 feet when retrieving objects in much rougher conditions.

Project Deep Ops concluded that whales could be trained to assist in Naval retrieval tasks. Some of the whales were successfully able, “to carry and deploy a hydrazine lift recovery system to a 1000-ft depth.” The report recommended continuing the project with a focus on pilot whales, rather than orcas.

The Navy completed a Technical Film Report on Project Deep Ops in 1972, which includes footage of Morgan the Pilot Whale demonstrating his training activities and open-ocean retrieval of objects.

Check out the video here https://youtu.be/isyO5tQfeqM

Incredible Summer Sea Camps, And More To Come In The Fall!

Pilot Whales - The Cheetah Of The Deep

The Lionfish Is Invasive & Dangerous, So Why Not Kill Them In Hawaii?